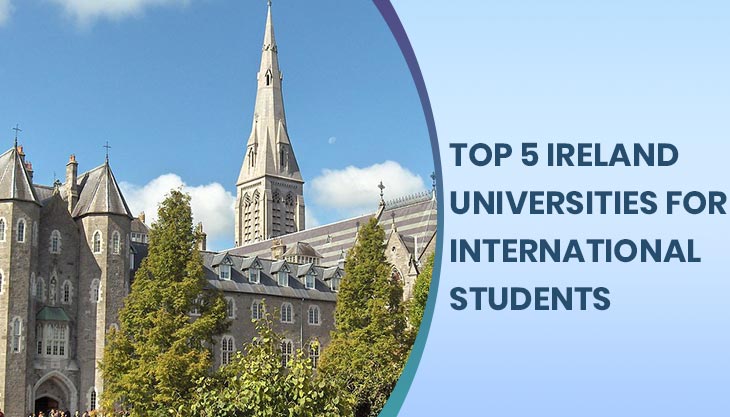 Long famed for its verdant landscapes and historic cities, Ireland has also emerged as a top Study Abroad destination for international students. Some of the world’s most prestigious universities, offering top-notch teaching and research, call Ireland home – that, coupled with a generally high quality of life, and the pleasure of living in such a beautiful country, are what draw students here from around the world, for their further studies.

This is a list of the top 5 best Irish universities for international students – read on to learn more about what makes each of them so special.

DCU was established in 1989, making it the youngest university in this list – however, in a few short decades, it has established itself as one of the world’s top universities, and one of Ireland’s best. It is currently ranked 429th in the world and is also ranked in the Times Higher Education Top 100 universities under 50 years. With a student population of 17000, it also has enrolled over 2000 international students. Ireland’s close cultural, historical and political ties with India are represented at DCU by the Ireland India Institute, which promotes collaborative research with India on contemporary Indian issues. The capital city of Dublin, where DCU is located, is not only the country’s administrative, financial, and cultural centre but also its hub for higher education, with several of its top-ranked universities located here. DCU thus benefits from its historically rich and contemporarily vibrant environment.

UCC is highly-ranked among European universities and in the top 2% worldwide, with a current world ranking of 310. It was established in 1845 and is a constituent college of the National University of Ireland. It boasts of over 15000 students, including 3000 representing over 100 countries around the world. Several of the subjects taught at UCC have been ranked in the top tier of the QS ranking, including Archaeology, Chemical Engineering, Electrical and Electronic Engineering, and Computer Science & Information Systems, amongst others, with Nursing and Pharmacy and Pharmacology, ranked in the world’s top 100. UCC was the world’s first university to receive the International Green Flag for environmental friendliness. The university is located in Cork, Ireland’s second-largest city and amongst its most culturally and historically rich – where the university grounds are a beautiful tourist attraction in itself!

Ranked several places ahead globally at 259th, thus among the top 1% of universities, and standing 3rd in Ireland, NUI Galway, founded in 1845, has a 200-year long tradition of academic excellent. It has been ranked among the world’s best for 18 subjects, which include Nursing, English Language and Literature, Medicine, Earth and Marine Sciences, and Geography. It is also a member of the 39-member Coimbra Group, an association of some of the oldest and most prestigious universities in Europe. Out of about 13900 students, close to 3000 are international. The university is located in the city of Galway – another one of Ireland’s beautiful and culturally-rich old cities, thereby offering international students everything in the way of an exciting Study Abroad experience!

Ranked 185th in the world and 2nd in Ireland, UCD is a major Irish university, well established in terms of its historical prestige. It was founded in 1854, and is a member of the National University of Ireland. In terms of its subject ranking, it is ranked 26th for Veterinary Science, 38th for Library & Information Management, 44th for Nursing, 49th for English Language and Literature, 50th for Sports-related subjects and for Mineral and Mining Engineering, with an additional 14 subjects ranked amongst the world’s top 100. UCD is Ireland’s biggest university, with a student population of 30000 – and it is also its most globally diverse, with over 8000 international students representing 138 countries studying here. UCD is another one of the several top institutions to be located in the country’s capital city – its campus is a large parkland with modern, located south of the city proper, built to suit the needs of a growing university. it continues to enjoy the benefits of proximity to vibrant and important Dublin.

Currently ranked 108th, Trinity College is Ireland’s most prestigious university, as well as its oldest – founded in 1592, modelled on the universities of Oxford and Cambridge, it is one of the 7 “ancient universities of the territory” of Ireland and the UK. It is currently a constituent of the University of Dublin. Its 400-year-old tradition of academic excellence persists till date, evident from its high rankings – in terms of subject rankings, 6 are included in the world’s top 50, including Classics and Ancient History in 13th place, English Language and Literature in 28th, Mineral and Mining Engineering in 39th, Nursing in 41st, Performing Arts in 42nd and Pharmacy and Pharmacology in 50th, with an additional 20 subjects ranked among the world’s top 100. Of its student enrolment numbering at 15000, over 5000 are international students, with Indian students make up the 2nd largest cohort of non-EU students, after the US! In fact, Trinity has ties with India dating back to the 18th century, and its Indian Society is one of the most vibrant student organizations of the University of Dublin. Furthermore, the university is housed in beautiful old buildings at the heart of the capital, and is, in fact, one of the major tourist-draws of Dublin city!

To learn more about these universities, do check out our individual blog posts on each. And if you want to dig deeper, the Hurray Overseas Education Consultant team is available for assistance. Reach out to us via email: overseaseducation@hurrayedutech.com, or phone: 8971357928,  for more details.