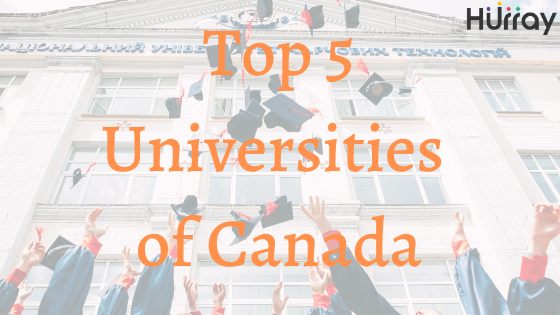 A high number of world-ranked universities, coupled with exciting opportunities to live and possibly work in some of the world’s major cities, set in the midst of stunning natural landscapes, have led to the emergence of Canada as a popular Study Abroad destination for international students around the world.

We’ve rounded up the Top 5 universities in Canada along with information about what makes each of them an excellent option for international students.

5. McMaster University
McMaster University, currently ranked 140th in the world, is a 129-year-old public university, located in the city of Hamilton, a port-city in the province of Ontario. It is considered one of the three most research-intensive universities in the country, and is the only Canadian host site of a United Nations University (The Institute for Water, Environment and Health), which engages with global issues. The university is best known for its programmes in the Health Sciences, as well as biochemistry and biomedical sciences, business administration, and communication and new media. It has a total student population of 24000, including 4600 international students representing 98 countries – thereby combining academic excellence with diversity and a global outlook. The university has its main campus on the banks of Lake Ontario, with the marshland bordering it to the north; thus, for nature-lovers, particularly those interested in hiking, the region around the university abounds in excellent opportunity.

4. University of Montreal
Université de Montréal, as it is officially known in the French language, is a university that has consistently been ranked among Canada’s Top 5. It currently holds a global rank of 137. One of the unique features of this university, as compared to the others in this list, is that it is a francophone institution – i.e. one where the programmes are taught entirely in French! Studying in this university would thus involve honing one’s skills in a language that is globally spoken, thus widening one’s career opportunities. Some of the graduate courses that are popular at this university are psychology, actuarial studies, internal security and so on. The university is also benefitted in its location – the city of Montreal is ranked among the top 10 cities for international students, and the only Canadian city to be included! One of the most important advantages of this city is its relatively low cost of living – here, housing rents are among the lowest in the whole of North America, as well as Europe.

3. University of British Columbia
UBC is one of Canada’s top universities, and is currently ranked 51st in the world – just one place short of the Top 50 best universities in the world, and gradually rising! It is a public university, and was founded in 1908, making it the oldest university in the province. With 55000 students in total, UBC has an international student population of about 14550, making it one of the most international universities in Canada. It has achieved excellent ranks for several of its taught subjects, most of which are included in the world’s top 50, with the following in the top 10 – Sports-related subjects ranked 3rd, Geography ranked 5th, Mineral and mining engineering ranked 9th, Earth and marine sciences ranked 12th in the world, Agriculture and forestry ranked 15th, and Psychology ranked 16th. Its global prestige is thus well-established! It has campuses in the sea-facing city of Vancouver and in Kelowna, a city on Okanagan Lake – each campus is in close proximity to some of Canada’s famed natural landscapes, and a haven for lovers of the outdoors!

2. McGill University
With a global ranking of 35, and a national rank of 2, McGill University is well-established as one of the most prestigious universities in the world. It was established in 1821 by Royal Charter, making it one of Canada’s oldest universities, and is located in Montreal, Quebec. It is one of two universities outside the United States which are members of the Association of American Universities, it is the only Canadian university to be a member of the Global University Leaders Forum (GULF), under the auspices of the World Economic Forum. In terms of its subject ranking, it is ranked 3rd in the world for Mineral and Mining Engineering, 10th for Anatomy and Physiology, 12th for Library and Information Management, 25th for Education and Training, 26th for Earth and Marine Sciences, 27th for Mechanical engineering, and so on, with most subjects ranking at least among the world’s top 50! To top it off, McGill University’s location in the world’s 6th best city for international students is an added bonus, with features such as cultural diversity, safety and stability, and general infrastructure and quality of living, all contributing to its top status.

1. University of Toronto
As Canada’s top university, and ranked 29th in the world, the University of Toronto has long established itself as a premier institution for teaching and research. Founded in 1827 by Royal Charter, it is one of the oldest universities in Canada. It has made some of Canada’s biggest contributions to the world, as the birthplace of stem cell research and insulin and where the first black hole was identified. It is thus of no wonder that it receives the most scientific research funding of any Canadian university, in addition to being one of the two members of the Association of American Universities from outside the United States. With a total student population of 74000, including over 24000 international students, not only is the University of Toronto one of the largest universities in Canada, but also one of its most international. The top ranked subjects taught at the university include Pharmacy and Pharmacology ranked 4th, Sports-related subjects ranked 5th, Nursing ranked 7th, Anatomy and physiology ranked 8th, Computer science and information systems ranked 11th, Statistics and operational research ranked 14th, Mineral and Mining engineering ranked 22nd, and so on. the university’s main campus is housed in beautiful old buildings. It is located in close proximity to the financial centre of Toronto, a city which is also considered Canada’s most culturally vibrant and exciting – with students at the university thus able to benefit from both!

If you want to know more about studying in Canada’s Top universities, the Hurray Overseas counselling team is available to help.

To book your one-on-one appointment, reach out to us via email: overseaseducation@hurrayedutech.com, or call us: +91 8971357928.